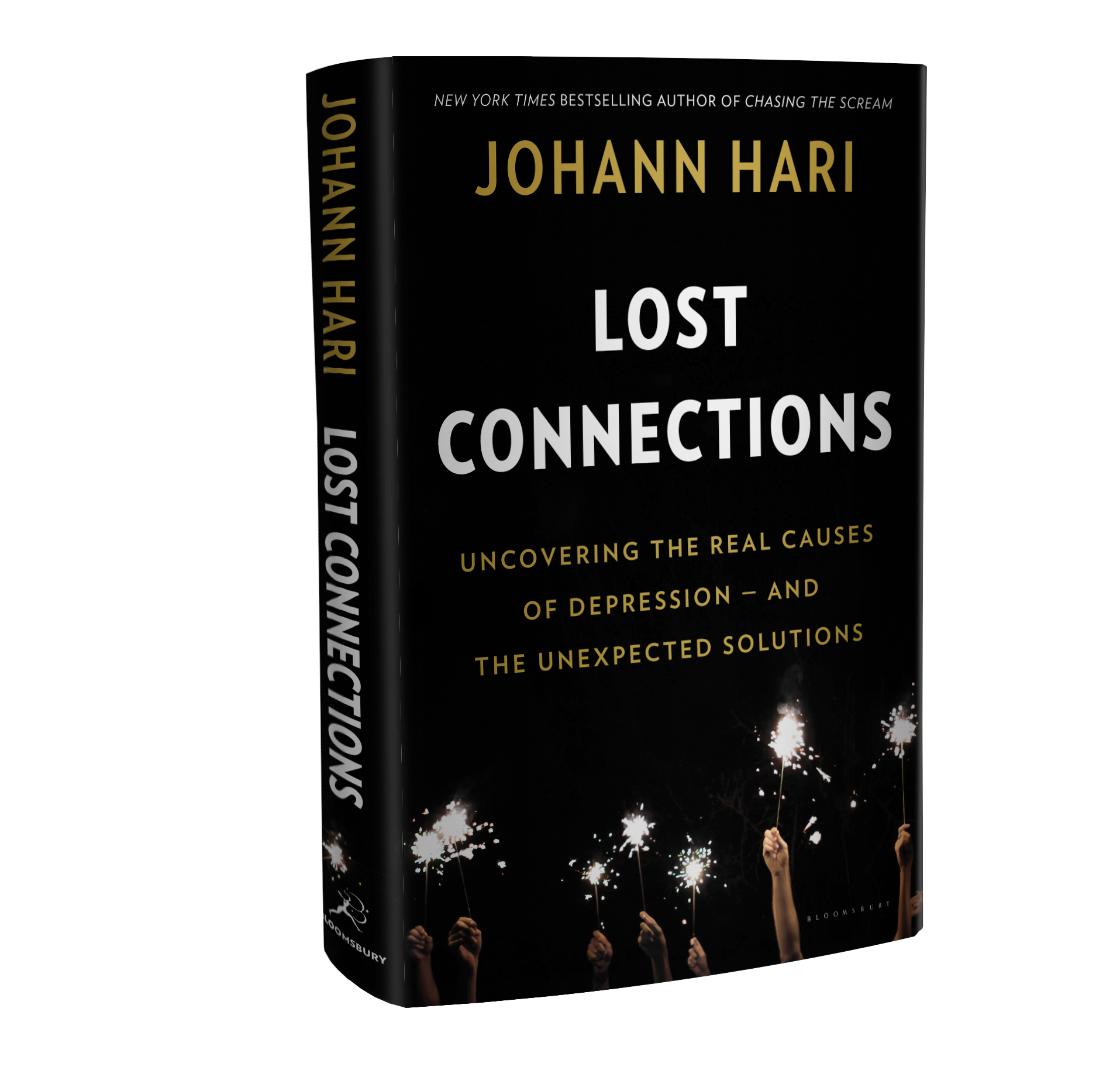 As a wellbeing coach, I have an insatiable thirst for learning the latest ideas, models and views on wellbeing issues.  Consequently I have a long and ever expanding list of books, articles and podcasts to keep abreast of.  There are many ‘self-help’ and ‘management’ books which are relatively low on content with a few salient points which could have been articulated much more economically, however Johann Hari’s “Lost Connections”, which follows his research into the causes of anxiety and depression, did not fall into this camp.  I listened to the audiobook version which was narrated by the author.  Throughout the book Hari used his own experience and the stories from the many people he encountered whilst conducting his research, to bring home the points he made in a very human and memorable way.

Prior to Covid-19, we were already in the midst of a rapidly escalating mental health epidemic. According to the World Health Organization (WHO) depression is now the number one leading cause of disability worldwide. WHO projects that by 2030, the amount of disability and life lost from depression will surpass that from war, accidents, cancer, stroke, and heart disease.  The BMJ reported in March 2019 that the number of NHS prescriptions for antidepressants in England had almost doubled over the previous decade from 36million in 2008 to 70.9 million in 2018.

Having taken clinical antidepressants for a number of years without an end to his suffering Johann Hari became unsatisfied with the ‘story’ that doctors had given him about having a chemical imbalance in his brain. His journey of research and discovery took him all over the globe talking to experts in depression with backgrounds in psychology, psychiatry and pharmaceuticals, as well as numerous sufferers of the condition.  The evidence he uncovered points to the fact that the biomedical narrative of depression (i.e. depression is caused by a reduction in neurotransmitters such as serotonin in the brain) and the resulting high levels of prescription of clinical antidepressants has been based on biased and misleading research.  These were not just his own conclusions – these were the official conclusions of the world’s leading medical institutions.

In the book Hari identifies nine distinct causes or roots of depression, examines each one in turn, and looks at alternative solutions for them beyond clinical antidepressants.  Two of the causes are genetic or biological but he claims these are not as widespread as previously thought. As the title alludes the remaining causes stem from disconnection from social and psychological needs.  We are social animals and we crave human connection. Yet over the last fifty years or so the rise of individualism has led to many damaging societal trends that result in us distancing ourselves from others and struggling to make meaningful personal connections.  For example, analysis from the Office for National Statistics shows the number of single-person households in the UK has risen sharply and it is projected that by 2039 one in seven people could be living on their own.

As well as connection to other people, Hari writes about the importance of connection to meaningful work.  By this he is not implying that we all need to work in sectors which are traditionally thought of as providing purpose such as nursing or teaching.  He describes the life of Joe from Philadelphia who worked in a paint shop. Day in and day out his role was to mix the pigment into paint for customers. “Take an order, shake paint, say thank you sir, wait” and repeat.  No one noticed or commented on how well he was doing his job and he had no ability to make any changes to his role. He felt there was no chance to learn or grow, and the monotony led to feelings of hopelessness and depression, yet at the same time he knew that he was lucky to have a job at all and so felt guilty for that too.

Joe was able to articulate what he felt he needed:

This really resonated with me – it fits with our need for an element of control over our workloads and our need for continual development and growth. The antidote to depression in this context is not an easy life – it is a role in life (whether paid or unpaid) that is pitched at the appropriate level of challenge (not too hard, or too easy), allows us flexibility in how we do it and provides opportunities for us to learn and grow and make a difference in other people’s lives. Perhaps it should be a necessity rather than an aspiration for employers to provide these roles?

He details other causes such as disconnection from the natural world and from meaningful values – the latter causing the obsession with accumulating wealth or possessions in the pursuit of happiness. This reminded me of a quote from Don Draper from Mad Men “Happiness is what you get right before you want more happiness”.

Listening to the book led me to think about how the pandemic will have exacerbated the mental health crisis through breaking our social connections.  Just this week reports have claimed that twice as many adults have described themselves as having symptoms of depression compared with this time last year.  Social distancing, isolation from friends and family, lack of physical contact for some, dwindling opportunities to work and to pursue leisure activities, as well as the enforced confinement with members of the household who in the worst case could be abusive, will have all taken a toll.  On the other hand, there have been many reports of local communities coming together to support each other.  Enforced changes in working locations has made us more adaptable and innovative, and some have forged closer bonds with people they live and work with.

Hari describes many potential solutions throughout the book but refrains from leaving the responsibility totally on individuals to heal themselves. He believes that the underlying social causes of depression have been largely ignored by governments. WHO summarised the evidence in 2011, “Mental health is produced socially.  The presence or absence of mental health is above all a social indicator, and therefore requires social as well as individual solutions”. He ends the book with a rallying cry for everyone to play their part in banding together to form connections and communities.

So what does this mean for us as either individuals who can relate to the suffering Hari describes, or as wanting to do what we can to help alleviate others’ suffering?

Take a look around you.

How could you reach out to build new connections to help another person or your wider community?

Your mental health will thank you for it.

Helen is a coach and a mental health first aider. She works with organisations helping them to provide working environments where everyone, whatever their role, is respected, valued and challenged to develop and grow.  She also works with individuals helping them find their place in the world.