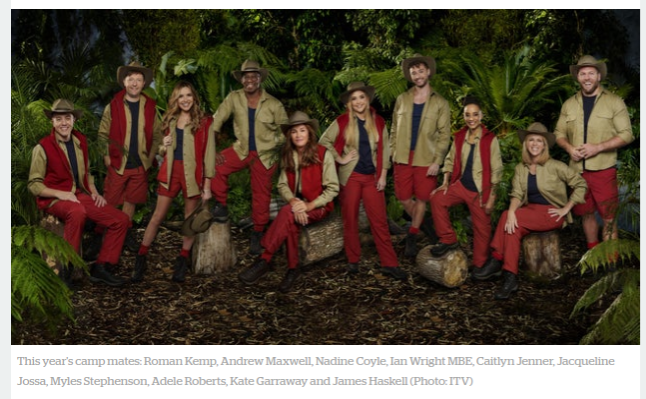 I have mixed feelings about the start of IACGMOOH.  I love watching it and find Ant and Dec’s repartee hilarious but it also signals the countdown to Christmas which always puts me in a bit of a spin.  Anyway that’s a topic for another day.

I was watching the launch show last night and was reminded how much stress these celebrities are put under throughout the course of the series.

We all know about the sort of stress that puts us into flight/fight/freeze for our physical survival.  Close encounters with a bunch of massive snakes or spiders will certainly get the adrenaline flowing for most of us.  But did you know there are five areas that influence our social behaviour that can put us into threat (or reward) state as surely as an arachnid creeping over your face?

Neuroscientist David Rock identified the five domains in his SCARF model and they help to explain why we sometimes get a “primitive” emotional reaction to social situations which we find really hard to control.  I’m a big fan of the model as it really helps to understand how we influence others’ behaviour both at home and at work. It occurred to me that the producers of I’m a Celeb are probably familiar with this and systematically push everyone’s buttons to get the biggest reactions – a great formula for television ratings!

S is for STATUS. Celebs will be vying for status and will suffer ups and downs all the way through. Andrew Maxwell knows he’s starting at the bottom!

C is for CERTAINTY. With surprises being sprung on contestants from the offset, nothing is certain (apart from the end date)!

A is for AUTONOMY.  Contestants have very little influence on what’s happening to them – they are at the mercy of the producers’ rules and the public vote.

R is for RELATEDNESS.  One of the things I love about the show is the unlikely friendships that are made and persist despite efforts to pit teams against each other and make people feel excluded.

As social animals the need for these five things is hard-wired in human behaviour.  We naturally crave them and if one domain is out of whack we try and make up for it in others.  Next time your colleague, friend, child or partner is annoyed or defensive with you see if you can work out if you have threatened one of their domains – or vice versa when you feel that emotional reaction.  It’s amazing how often you can identify them.

Having all five domains attacked at once puts jungle contestants under immense stress.  This, combined with lack of food and sleep, is tantamount to torture! But celebs willingly agree to put themselves up for the challenge – perhaps the financial reward is enough, but I think the appeal must be more about putting yourself so far out of your comfort zone and seeing how well you will cope.

That’s the nature of resilience.  A bit like an elastic band – you don’t know how far you can stretch it before it snaps.

Everyone’s band is different – some more stretchy than others.  There are things we can do to stop our band going brittle – exercising, socialising, preserving some quiet mindful time, eating and sleeping well.  It will be interesting to watch how well the celebs cope with these options being limited – but some will pull together, forge friendships and attempt to rebalance the unfairness.  And though some will try underhand tactics to garner favour, the winner will always be the person who remains true to themselves throughout.

My money’s on Caitlyn.  What do you think?